You are not alone. Seeking justice for survivors of

childhood abuse is more than a job - it's our cause." 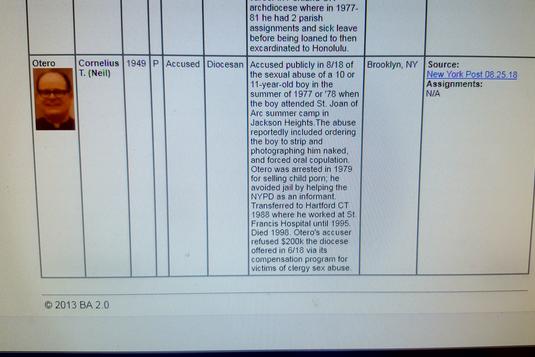 WE HANDED OUT OVER 1000 FLYERS AND SPOKE WITH 100'S OF COMMUNITY RESIDENTS IN FRONT ST. JOAN OF ARC, THE PARISH WHERE THE ABUSE OCCURRED.

Our founder IS A SURVIVOR

8/27/18
My abuser, Fr. Neil Otero was
added to the list of pedophile priests.
http://www.bishopaccountability.org/

Thanks to Melkorka Licea

Paul was born on June 14, 1966 and is currently 52 years old. He was a parishioner at St. Joan of Arc in Jackson Heights, New York. Paul came to know Fr. Cornelius (“Neil”) Otero as his parish priest. On approximately 6 occasions from approximately 1976 to 1977, Fr. Otero sexually abused Paul. At the time of abuse, Paul was approximately 10 to 11 years old and in approximately 4th to 5th grade.

SIGN THE PETITION TO PASS THE
CHILD  VICTIMS ACT

The degree of intrusiveness: Genital manipulation, oral copulation, simulation of sodomy, forced to pose in sexually suggestive positions for photos.
Control of environment: Fr. Otero isolated and abused Paul in the basement of a St. Joan of Arc School building and the changing area of a pool at Jones Beach.
Number of perpetrators: 1

Aggravating circumstances: Fr. Otero forced Paul to pose in sexually suggestive positions for photos and told Paul that God would be angry if he declined to do so. Fr. Otero told Paul that, if he disclosed the abuse to anyone, Paul would die and go to hell.

Paul was a parishioner at St. Joan of Arc in Jackson Heights. He came to know Fr. Otero as his parish priest. Paul attended CCD classes and summer camp at St. Joan of Arc, and Fr. Otero was present for the camp’s day-to-day activities. Fr. Otero began to seek out Paul and some of Paul’s friends and speak to them. Fr. Otero played kickball with Paul and his friends at summer camp. Paul trusted Fr. Otero and admired him as a kind adult and religious authority figure.

While Paul attended summer camp at St. Joan of Arc, Fr. Otero took Paul and other boys on summer trips to a pool at Jones Beach. Paul noticed that Fr. Otero always invited boys who came from broken homes. While at Jones Beach, Fr. Otero took Paul to the cabana-style changing rooms and pulled out a camera. Fr. Otero made Paul take off his bathing trunks and began taking photos of Paul. Fr. Otero forced Paul to pose in sexually suggestive positions and continued taking photos. Fr. Otero told Paul that it was okay for him to photograph Paul naked and that God would be angry if Paul declined to let Fr. Otero photographhim.

Over time, Fr. Otero’s abuse progressed. Fr. Otero began to touch Paul’s naked penis in an attempt to give Paul an erection. Fr. Otero then pulled his penis out of his clothing and made Paul touch and manipulate his penis. Fr. Otero also rubbed his erect, naked penis on Paul’s penis and anus, all the while taking photos. Fr. Otero made Paul orally copulate his erect penis and genitals on approximately 3 occasions, all the while masturbating himself until he ejaculated. Fr. Otero told Paul that this was their secret game with God, and that he should not tell anyone about it. Fr. Otero threatened that, if Paul told anyone about the abuse, Paul would die and be sent to hell. After the abuse ended, Fr. Otero gathered the children who went on the trip, bought them ice cream, and drove them home.

Similar occasions of abuse occurred in the basement of a St. Joan of Arc School building. On one occasion, Paul and other campers were playing dodgeball in the basement of the building. Fr. Otero found Paul and other children playing dodgeball indoors and became angry. Fr. Otero directed all campers and camp counselors to leave, but told Paul to stay. When Fr. Otero and Paul were alone, Fr. Otero brought Paul to a bathroom in the building’s basement and forced him to orally copulate Fr. Otero while Fr. Otero took photos of Paul doing so.

Impact of Abuse
Mental health symptoms: Depression, anxiety, symptoms of Post-Traumatic Stress Disorder (PTSD), alcohol and drug abuse, suicide attempt, self-harm, low self-esteem, nightmares, sleep issues, hyper-vigilance, symptoms of agoraphobia, feelings of being tainted, shame.
Impact on education and employment: Dropped out of high school and never received GED or diploma. Unable to realize the dream of becoming an attorney.
Impact on relationships: Three failed marriages, damage to the relationship with mother and step-father, trust issues, isolation, problems with authority.
Impact on faith: Anger at the Catholic Church for its handling of clergy sexual abuse stopped attending church.
Current functioning: Paul continues to carry the shame he feels as a result of Fr. Otero’s abuse. His fear of leaving his home makes it difficult for him to network and grow in his career.

Paul felt scared and confused while Fr. Otero was abusing him. Fr. Otero ingratiated himself with Paul at summer camp, and later exploited Paul’s trust in him. Paul suffered from depression and anxiety after the abuse. He began to drink alcohol in grade school in order to cope with the trauma of his abuse. Paul drank every night while at summer camp. Later, as a teenager, he began to abuse drugs. His drug and alcohol abuse continued into his adult life. Paul engaged in self-harm by cutting his wrists, and eventually attempted suicide by cutting his wrists during his early teenage years. Paul suffered from sleep issues and nightmares after the abuse, and he continues to have difficulty sleeping today. Thinking of the abuse keeps him awake at night. Paul suffers from symptoms of PTSD as a result of Fr. Otero’s abuse. He is hypervigilant and is triggered when he drives by St. Joan of Arc. Paul continues to carry the shame he feels as a result of Fr. Otero’s abuse. Paul’s feels as though he is tainted as a result of the abuse and, as a result, lacks motivation.

The abuse negatively affected Paul’s education. After Fr. Otero’s abuse, Paul lost interest in school and resented authority figures. He frequently acted out in school and, on occasion, he lashed out and became physically violent toward his peers. Paul’s alcohol and drug abuse caused him to get in trouble with the law. He stopped attending school consistently after 10th grade, and eventually dropped out of high school altogether. Paul never obtained his high school diploma or G.E.D.

The abuse also negatively impacted Paul’s employment. Because he never completed his high school education, Paul was unable to achieve his childhood dream of becoming a lawyer. He owns his own business and, in order to promote his business, frequently is required to network with others in his field. However, Paul experiences symptoms of agoraphobia and frequently does not leave his house because he fears that he will be abused again. Paul’s fear of leaving his home inhibits his ability to build a network of colleagues and grow in his career.

The abuse had a detrimental impact on Paul’s relationships. Paul’s anger, substance abuse, and suicide attempt as a teenager strained his relationship with his mother and step-father. On one occasion, Paul became physically violent toward his step-father, which made it difficult for Paul and his step-father to have a relationship afterward. Each of Paul’s three marriages has ended in divorce in large part due to Paul’s trust issues and inability to effectively communicate with his ex-wives. Paul isolates himself and has difficulty making and maintaining lasting relationships.

Paul’s faith was negatively affected by the abuse. Although Paul remains Catholic, he no longer attends church. He is angry that the Catholic Church did not do more to address the issue of clergy sexual abuse.

was ordained a priest for the Diocese of Brooklyn in the 1950s. His first parish assignment was Queen of All Saints in Brooklyn, where he worked from 1959 to 1966. In 1967, Fr. Otero was transferred to St. Teresa’s in Woodside, New York, where he remained until 1971. 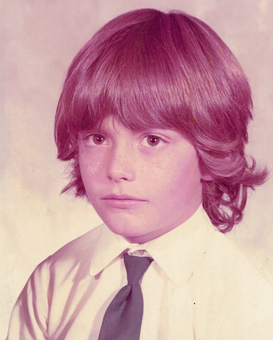 to promote, inform and educate